In the interests of clarity, I need to say that I am a huge fan of Mae Wood and her writing. I follow her on social media and I managed to score an ARC of her newest release, Genealogy. This book was a departure for her, as her first releases were more mainstream contemporary romances. This is an epistolary novel and not to mince any words-it’s gorgeous. 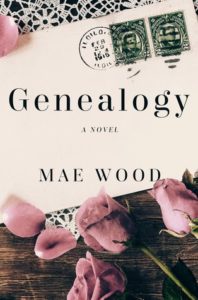 The story is told through the interweaving of two time frames: Alice trying to choose between Elliot and Fred during the First World War and Ali working through relationships with Scott and Ben now. Both couples are separated by distance and keep in touch through correspondence. Alice is dependent on letters sent halfway around the world through the challenges of war-time ship movement. Ali has the speed of delivery and the agony of wait times with the potential immediacy of email, text messages, and video messaging to keep in touch across the country. The two stories are linked by the fact that Ali is named after Alice, her great-grandmother. Ali inherits a pack of the letters sent to Alice from Elliot.

I was delayed in getting to read this book by a couple of days, and finally sat down to at least start it this morning. I ended up finishing it, sitting next to a cold cup of tea. This story sucked me in, entirely. The characters are warm and unique and as cliched as it sounds, Alice, Elliott, and Fred really do have the charm and innocence that we associate with earlier times. The earnest devotion of first love, an era when showing off your calves was risque, and the pain of making choices when your dreams collide. Mae has done a fabulous job of capturing the tone of the era, in the language that the characters use, in the details that influence their actions, and in the descriptions of the world they live in. By contrast, Ali, Scott, and Ben, faced with a similar situation in their personal lives, make their choices based on a different set of priorities and rationales that will be more familiar to readers. Ali is given Alice’s letters just as many parts of her life are in flux, and she uses the letters first for diversion and then for inspiration.

There are many emotional moments throughout the book. I was giggling, gasping, intrigued, and sad by moments. But without giving anything away, the last chapter was when my heart was really ripped out. No one expects that last few paragraphs of an entire book to be when they cry, but that’s what happened. Not to worry, it does have a happy ending, but it’s the bittersweet happiness of real life, not the perfect “happily ever after” that standard romance novels excel in. I’d give it an extra star just for that, if I could. As it is, I’m giving it an enthusiastic 5 stars on Goodreads.

NOTE: As an added bonus, Mae has included discussion points at the end of book, making this an excellent choice for your book club or classroom.